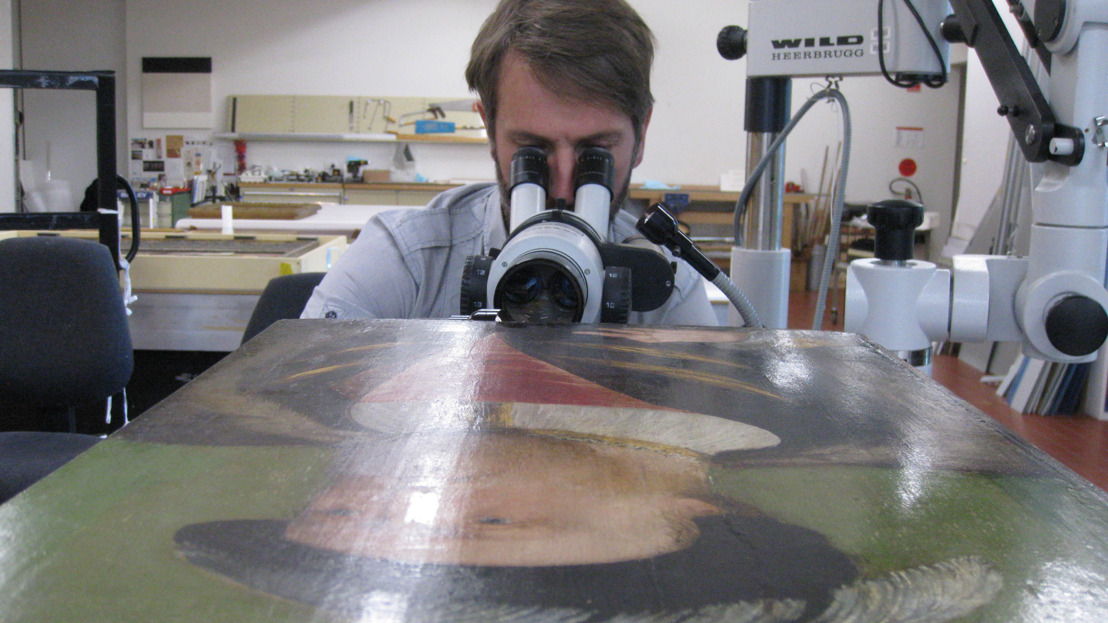 Tuesday, August 14, 2018 — An academic at the Australian National University has dated an ancient portrait of Henry VIII using specialised scanning technology and his expertise in annual tree-rings.

Dr Matthew Brookhouse of the ANU Fenner School of Environment and Society examined a scan of an oak panel painting of the Tudor King to conclude it was created in 1525.

Dr Brookhouse said the scanning procedure, used at the Australian Synchrotron in Melbourne to analyse layers of paint, co-incidentally revealed the underlying structure of the wood for the first time.

“One of the images had the appearance of wood grain and it was so clear, I could see the tree-rings in the oak. I was immediately excited because I knew there was a good chance I could work out the date the tree was felled.”

“We were able to say with some certainty that the panel was cut from a tree which originally grew near Sussex in south west England,” he said.

The Art Gallery of New South Wales approached Dr Brookhouse for help in dating the artwork, and had the entire portrait scanned on the x-ray fluorescence beamline to reveal the elements in the paint and how it was applied.

“I’d previously examined the portrait for the gallery using standard methods, but was unable to date it without sanding the edge of the panel or altering it in some way, which I was reluctant to do with such a precious artefact.”

“It’s the first time an oak panel painting has been dated this way anywhere and it’s because we have access to the technology here in Australia.

“The gallery’s intention of sending the panel to the synchrotron was to learn more about the artistic process and the author. The information revealed in the underlying wood is an incredibly wonderful outcome all of its own and independent of the original objective,” he said.

Dr Brookhouse said dendrochronology, the science of dating climatic events using annual growth rings in timber, is not widely known in Australia due to the nature of our trees and climate.

“There are very few dendrochronologists in Australia and the gallery thought they’d have to find someone in Europe. To confirm the date, we collaborated with the University of St Andrews in Scotland and University College London to compare our scan with the UK’s tree-ring chronologies.

Simon Ives, a painting conservator at the Art Gallery of NSW, said very little was known about the painting which had been mis-attributed to both Hans Holbein the Younger and Jan Van Scorel before being purchased by the gallery.

“I was astonished and very impressed with the precision Dr Brookhouse was able to achieve with the date of 1575 and locating it to south-east England,” he said.

“It really clarifies the origin of the painting and gives us a greater connection with it.”

“Having a date was also crucial to the conservation project for the panel because it allowed us to determine which layers of paint were original and which were added much later. We then removed the non-original paint and revealed hidden features like the original placement of the King’s fingers which had been altered,” said Mr Ives.

The Henry portrait, which had been in storage since its purchase in 1961, is now on display at the Art Gallery of NSW, where an accompanying virtual reality experience explains what has been discovered about the painting through the four-year conservation project.

Fenner School of Environment and Society