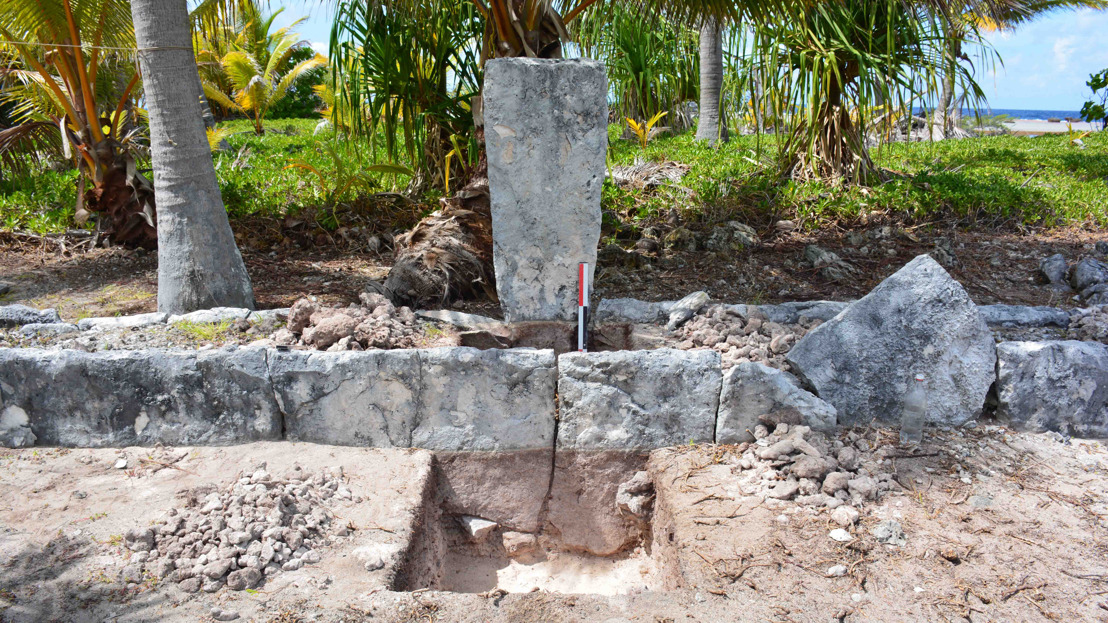 Thursday, September 27, 2018 — An archaeologist at The Australian National University (ANU) has discovered primary evidence of ritualistic practices involving turtles in French Polynesia described in accounts by missionaries in the 19th Century.

Pacific Archaeologist, Dr Guillaume Molle of the ANU School of Archaeology and Anthropology excavated three sites on the ring-shaped coral atoll of Fakahina in the Tuamotu Archipelago, uncovering two open-air ceremonial sites, one containing the remains of ritual offerings of turtles.

Dr Molle said Catholic missionaries from France and Belgium observed and documented the “pagan” practice of the turtle ceremonies on Fakahina before supressing them in their efforts to convert the population to Christianity.

“I was very lucky, after two days excavating I found this beautiful deposit of turtle bones about 30 centimetres beneath the surface. It was interesting because it appeared to be an offering of part of the turtle only as it was just the vertebrae. Finding out why is one of the big questions we have now."

“The turtle was seen as an embodiment of the ancestors and clans and was also symbolically tied up with fertility, so when the turtles returned each year, it marked the start of the season of abundance and the people performed a lot of religious ceremonies at this time ultimately relating to their survival,” said Dr Molle.

The turtle rituals were performed on the open-air ceremonial sites, knows as “Marae” by the Polynesians. Dr Molle said offerings of turtle meat were made on an altar-like platform and parts of the turtle were cooked in separate ovens, then shared according to a strict hierarchy in the society with the turtle head and heart reserved for high-ranking individuals.

Dr Molle said excavating an atoll of coral bedrock was particularly difficult, and with cyclones washing a lot of the landscape away it was extremely satisfying to discover the Marae - one containing a dedication of coral branches in a pit beneath the coral-slab altar.

“This was really exciting; it’s like finding the foundation stone of a cathedral. Before building a Marae, the site was sanctified by sprinkling salt water over coral branches taken from the sea.”

“The people then built the structure and ceremonial platforms around this first offering so we’re seeing the very first gesture of the people marking the construction of this sacred site,” said Dr Molle.

As well as the coral-slab altar, they built a cist or ceremonial chair which could contain offerings and was used by the officiating tribal leader.

“I suspect some ceremonial sites may have been destroyed following the missionaries’ installation in the 1860s; so now we’re doing “contact archaeology” where we can see how life changed after the arrival of Europeans,” said Dr Molle.

“If we find bones which show turtle offerings were still being made after the Europeans’ arrival, we can assume the conversion to Christianity was less straightforward than the missionaries attested and that there was some resistance."

“Archaeological and anthropological study in this part of the world has been quite neglected for decades, but we’re finding this is a key region in understanding human migration and the development of chiefdoms,” said Dr Molle.

“By looking at the sites and practices we’re gaining an insight into the social organisation of the society and how it adapted and survived on this unique but harsh coral environment”.

Dr Molle will return next April to excavate two more sites – one associated with an oral tradition describing the slaughter and burial of invading warriors.

School of Archaeology and Anthropology