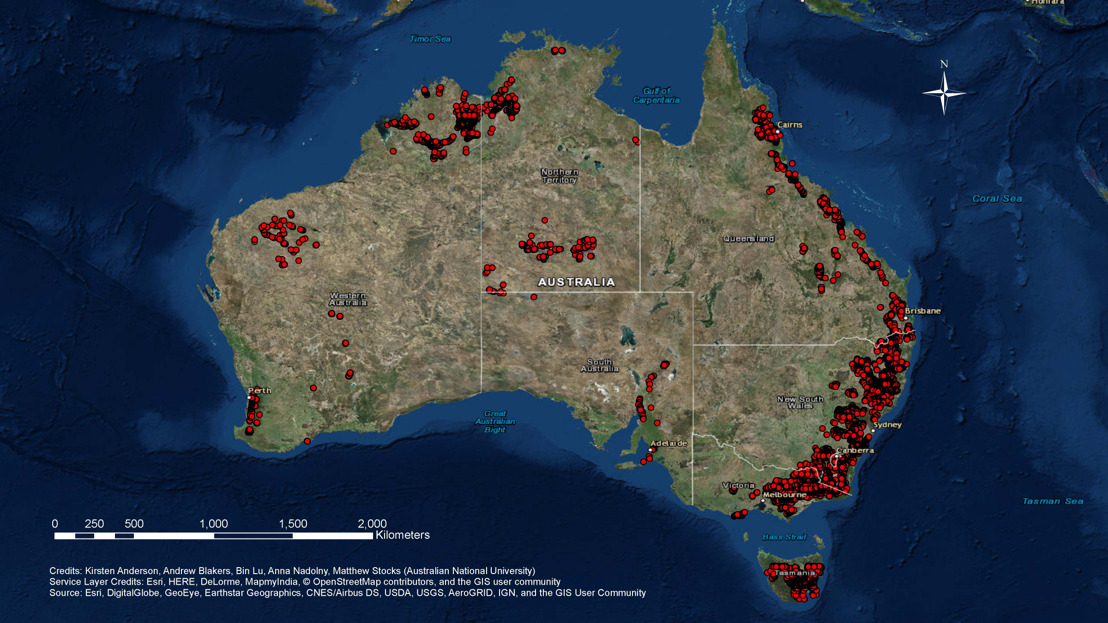 Thursday, September 21, 2017 — The Australian National University (ANU) has completed an audit of 22,000 potential sites across Australia for pumped hydro energy storage, which can be used to support a secure and cheap national electricity grid with 100 per cent renewable energy.

The zero-emissions grid would mainly rely on wind and solar photovoltaic (PV) technology, with support from pumped hydro storage, and would eliminate Australia's need for coal and gas-fired power.

“Australia needs only a tiny fraction of these sites for pumped hydro storage – about 450 GWh of storage – to support a 100 per cent renewable electricity system,” said Professor Blakers from the ANU Research School of Engineering.

“Fast tracking the development of a few of the best sites by 2022 could balance the grid when Liddell and other coal power stations close.

“Pumped hydro storage, including Snowy 2.0, can be developed fast enough to balance the grid with any quantity of variable wind and solar PV power generation, including 100 per cent renewable energy.

“We found so many good potential sites that only the best 0.1 per cent will be needed. We can afford to be choosy.”

Maps showing the locations of potential STORE sites and a report on the findings are available at <http://re100.eng.anu.edu.au/research/phes/>. The number of potential sites found in each state and territory is shown in the table below.

STORES sites require pairs of reservoirs at different altitudes, typically ranging from 10 hectares to 100 hectares, in hilly terrain and joined by a pipe with a pump and turbine. Water is pumped uphill when wind and solar energy is plentiful, and electricity is available on demand by releasing the stored water through a turbine.

Co-researcher Dr Matthew Stocks said that off-river pumped hydro storage typically delivered maximum power for five to 25 hours, depending on the size of the reservoirs.

“Like all hydro power, it can go from zero to full power in about one minute,” said Dr Stocks from the ANU Research School of Engineering.

“Annual water requirements would be much less than half that of the current fossil fuel system because wind and PV do not require cooling water.”

Co-researcher Mr Bin Lu said all of the potential STORES sites were outside national parks and urban areas, and each site had a storage potential range of 1–300 GWh.

“Pumped hydro – which accounts for 97 percent of energy storage worldwide – has a lifetime of 50 years, and is the lowest cost large-scale energy storage technology.”

*Head refers to the minimum altitude difference between potential upper and lower reservoirs in the data set – a larger head is generally better. All identified upper reservoir sites are outside national parks and urban areas. A cost model of pumped hydro is also under development and will be made publicly available. Optimum lower reservoirs will be determined with the aid of this cost model.