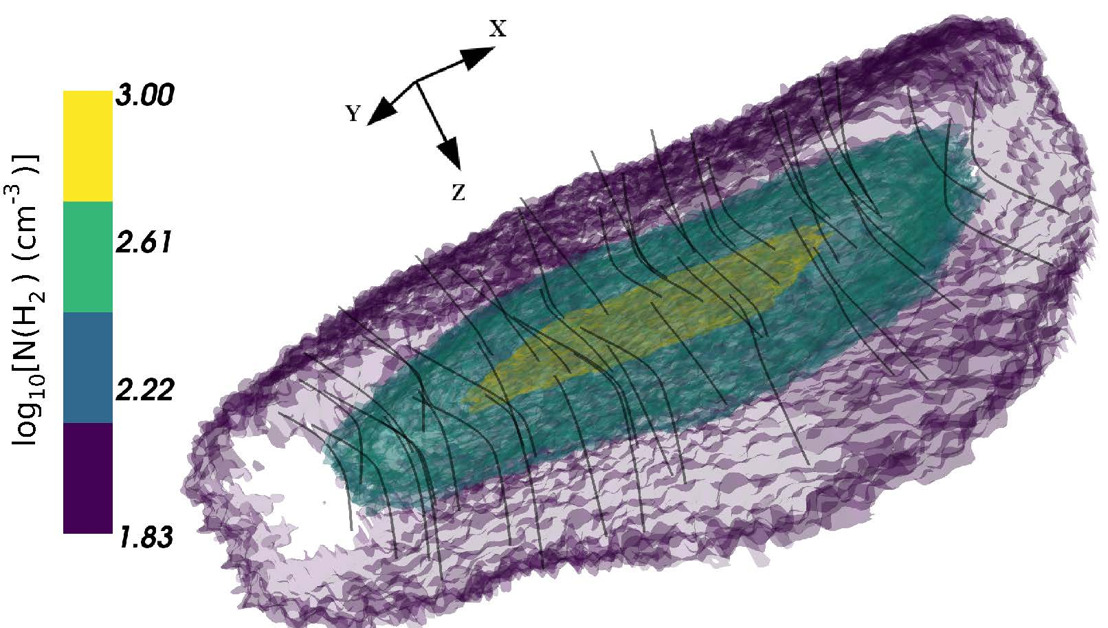 Friday, May 11, 2018 — A study led by The Australian National University (ANU) and the University of Crete in Greece has shed new light on the mystery of how our solar system formed in a cloud of gas and dust in space billions of years ago.

Lead researcher Dr Aris Tritsis from ANU said the study visualised the 3D shape of a star-forming cloud called Musca, which appears as a needle in the southern sky.

Musca lies hundreds of light years away from Earth. The large gas cloud, formed mainly of molecular hydrogen and dust, stretches about 27 light years across the plane of the sky, with a depth of about 20 light years and width up to a fraction of a light year.

“We were able to reconstruct the 3D structure of a gas cloud in its very early stages of making new stars and planets, which will ultimately take millions of years to form,” said Dr Tritsis from the ANU Research School of Astronomy and Astrophysics.

“Knowledge of the 3D shape of clouds will greatly improve our understanding of these nurseries of stars and the birth of our own solar system.”

He said scientists could now use Musca as a model to learn how stars and planets formed.

“With its 3D shape now determined, Musca can be used as a laboratory for testing star formation, astrochemical and dust-formation theories,” Dr Tritsis said.

“We see, for the first time, that this cloud is not a thin, static streak of gas in space, but a vibrating, complex structure. Despite its needle-like appearance, Musca actually resembles a sheet viewed edge-on.”

Musca is surrounded by ordered hair-like structures called striations, which are produced by trapped waves of gas and dust caused by the global vibrations of the cloud.

The research team was able to determine the shape of Musca by analysing the spatial frequencies of these vibrations, which were then converted into ringing tones to reveal the ‘Song of Musca’.

“This is a cloud in space that is singing to us – all we had to do was listen. It’s actually quite awesome,” Dr Tritsis said.

In addition to providing new insights into star and planet formation, the model of Musca cloud can also be used to see how molecules form in gas clouds.

Co-researcher Dr Konstantinos Tassis from the University of Crete said Musca was the largest structure in the Milky Way galaxy found to be vibrating as a whole.

“There’s a whole range of new things we can learn from this model,” Dr Tassis said.

The study, which was part of Dr Tritsis’ PhD thesis, has made use of data from the European Space Agency's Herschel space telescope.

The research is published in Science.

Important notice: This international journal strictly enforces the embargoes of its papers. Please ensure that this research is not reported in any medium, including print, before the embargo lifts.

NASA has some high quality optical images of the Musca gas cloud, such as this one: https://apod.nasa.gov/apod/ap150910.html

Important notice: Your news organisation would need to do its own due diligence regarding copyright laws to ensure it would have permission to use any NASA images with the appropriate acknowledgement.

Click on the image link below to download the researchers' 3D model of the Musca gas cloud.

Watch a short ANU video on the research: https://youtu.be/K9cp2FWHGLc