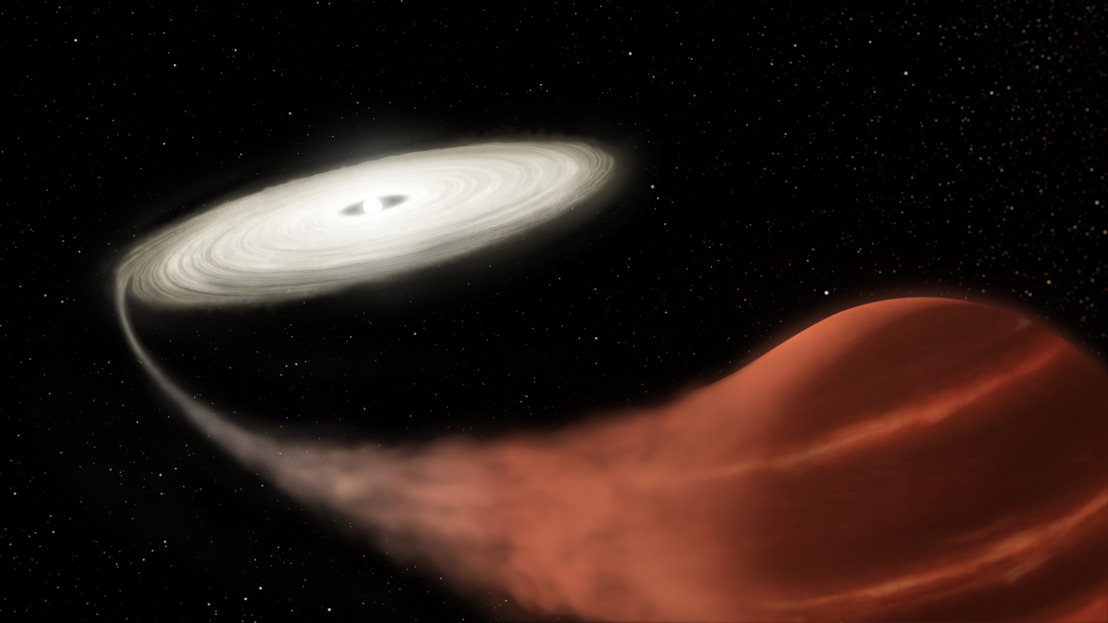 Saturday, January 25, 2020 — Astronomers have found a ‘vampire’ star in the midst of a feeding frenzy, with the help of an automated program that is sifting through archived data from the decommissioned Kepler Space Telescope.

The new program acts like a detective to find clues of very fast, mysterious explosions in the Universe.

Lead researcher Ryan Ridden-Harper said the program found a dwarf nova, which comprises a white dwarf – the dense remains of a star, something our Sun will be in billions of years – gorging on a brown dwarf companion. The brown dwarf, which is 10 times less massive, is a failed star resembling a planet.

“The rare event we found was a super-outburst from the dwarf nova, which can be thought of as a vampire star system,” said Mr Ridden-Harper, who conducted the study as part of his PhD at The Australian National University (ANU).

“The incredible data from Kepler reveals a 30-day period during which the dwarf nova rapidly became 1,600 times brighter before dimming quickly and gradually returning to its normal brightness.

“The spike in brightness was caused by material stripped from the brown dwarf that’s being coiled around the white dwarf in a disk. That disk reached up to 11,700 degrees Celsius at the peak of the super-outburst.”

The program aims to find rare astronomical events that evolve rapidly, over hours or days –such as gamma ray bursts from core-collapse supernovae, colliding neutron stars or potentially those not seen before through optical telescopes.

“The discovery of this dwarf nova was unexpected, since it wasn’t what we were searching for, but it provided excellent data and new insights into these vampire star systems,” said Mr Ridden-Harper, who made the discovery in collaboration with colleagues at ANU and the Space Telescope Science Institute (STScI) and the University of Notre Dame in the United States. He recently joined STScI as a Postdoctoral Fellow.

“The next steps for this project are to comb through all Kepler data and extend it to data from the Transiting Exoplanet Survey Satellite, which is known as TESS,” Mr Ridden-Harper said.

“This will give us the best understanding of the most rapid explosions in the Universe. Along the way, we might discover some rare events that no other telescope could find.”

Dr Brad Tucker, who supervised Mr Ridden-Harper’s work, said the program has extended the use of the Kepler Space Telescope’s data to support innovative science.

“We’ve used it to see stars as they explode, the secret lives of black holes and now things previously missed – this vampire star that had been lurking in the darkness of space,” said Dr Tucker from the ANU Research School of Astronomy and Astrophysics.

The research is published in the Monthly Notices of the Royal Astronomical Society.