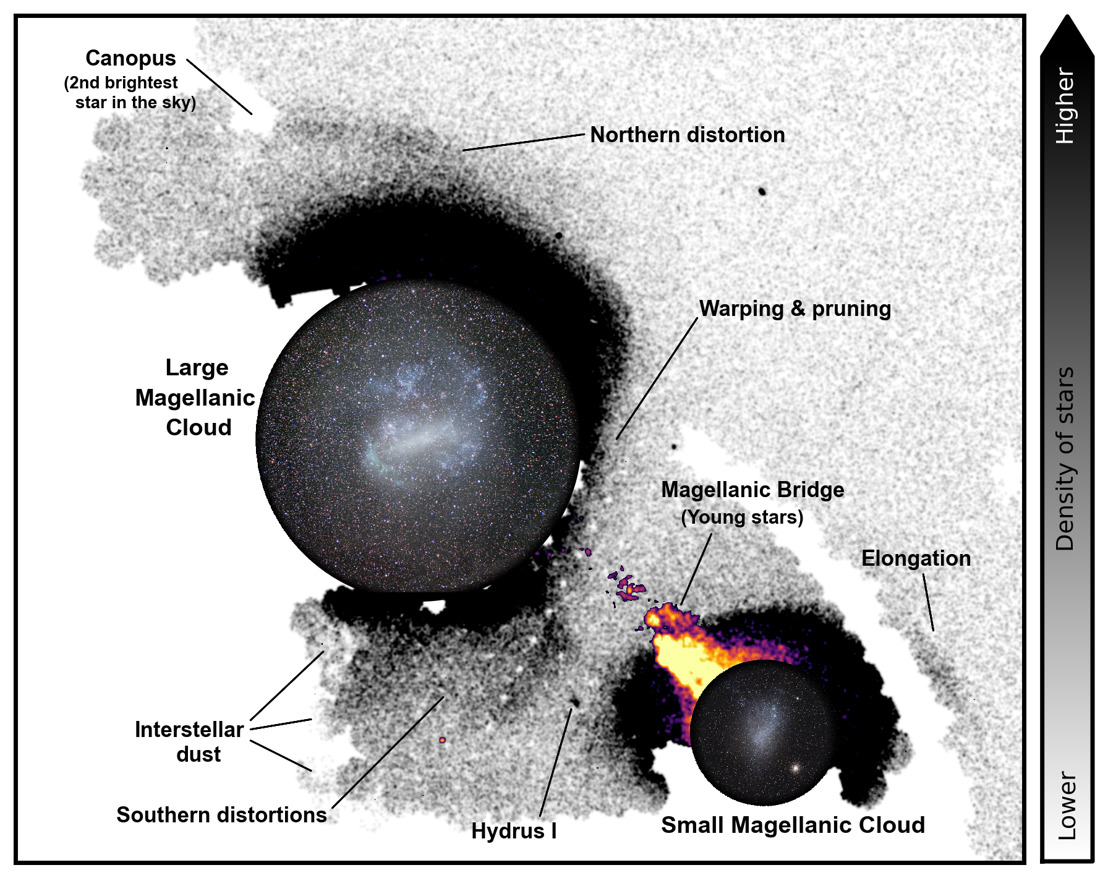 Friday, November 9, 2018 — Astronomers have witnessed, in the finest detail yet, a brutal David-vs-Goliath fight between two nearby galaxies that are tearing chunks from each other and flinging them into the gaseous Magellanic Stream, a cosmic river of blood encircling our Milky Way.

The new study led by The Australian National University (ANU) investigated the violent stoush between the Large and Small Magellanic Clouds – dwarf galaxies on the Milky Way’s periphery that are visible at night with the naked eye from the southern hemisphere.

Lead researcher Dr Dougal Mackey from ANU said the team created an ultra-faint map of stars in the outer edges of the Clouds using the Dark Energy Camera on the 4m Blanco telescope in Chile and revealed the Clouds have had repeated interactions with each other over billions of years.

“This fight is a lot like the one that David and Goliath could have had if the little guy didn’t have such good luck with his sling shot,” said Dr Mackey from the Research School of Astronomy and Astrophysics at ANU.

“The Large Magellanic Cloud is really beating up its smaller companion – the outer parts of the Small Cloud are strongly elongated both towards and away from the Large Cloud.”

The distribution of stars with different ages in the Small Cloud indicates possible unpleasant encounters with the Large Cloud stretching back several billion years.

“The Large Cloud has definitely not come away unscathed from these brawls, as the side closest to the Small Magellanic Cloud is heavily warped and pruned, and other parts of its outskirts show major distortions.”

Dr Mackey said the results provided further evidence that the nasty and continuous conflicts between the two Clouds had created the Magellanic Stream.

“The Clouds will eventually be completely consumed by the Milky Way, but we would like to know how long they have left, and what sort of impact they will make before their ultimate destruction,” he said.

“We also revealed, in the best detail so far, young stars forming in Magellanic Stream between the Clouds – this part of the Stream is known as the Magellanic Bridge.”

“This galaxy is part of a class known as ultra-faint dwarfs, the existence of which was only discovered about 10 years ago. These are extremely low-brightness dwarf galaxies, but they still have lots of dark matter,” he said.

There is broad scientific consensus that dark matter – matter that scientists cannot see – is widely present in the Universe and helps explain how galaxies hold together rather than fly apart as they spin.

“Hydrus I is likely to be a satellite of either Cloud or both that has fallen into the Milky Way together with its larger companions,” Dr Mackey said.

Astronomers from the United Kingdom and United States supported the study, which is published in the Astrophysical Journal Letters.

* The research team developed a visual map that reveals the Magellanic Clouds have had repeated interactions with each other over billions of years. This can be downloaded by clicking on the image icon below. Image credit: Dougal Mackey, ANU