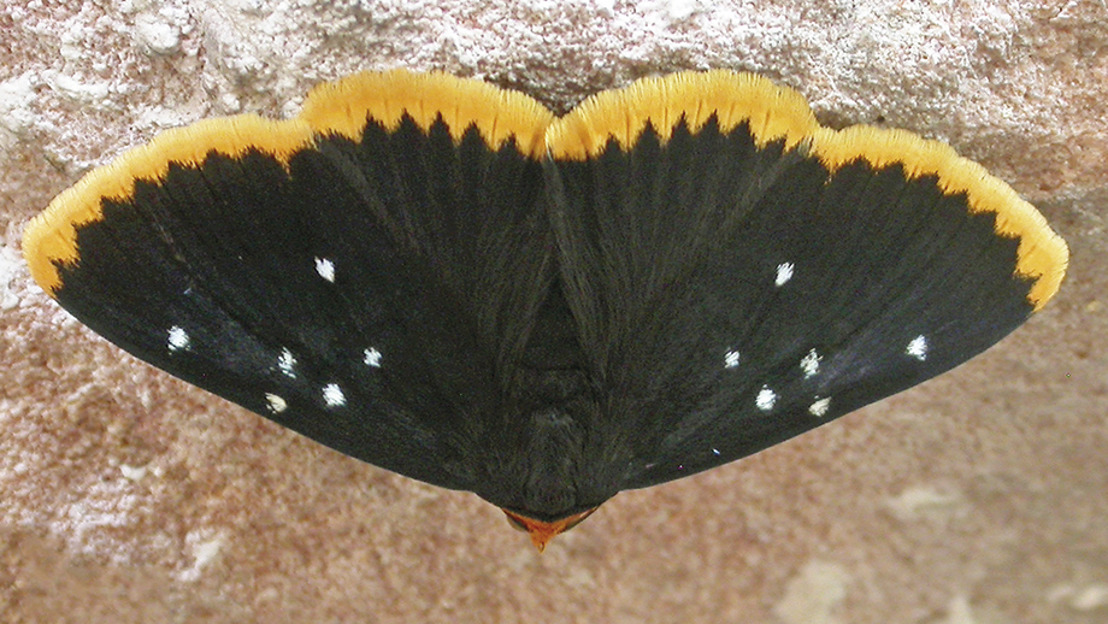 Friday, March 1, 2019 — Researchers from the Australian National University (ANU) have discovered several new species of butterflies and moths in Northern Australia, identifying a conservation stronghold of national and international significance.

Among the discoveries was a breeding colony of a rare species of whistling moth, not seen for 110 years and known only by a single museum specimen collected in 1887.

Researchers have also expunged ten species from the record either erroneously described or mistaken for another species.

The findings are the culmination of over ten years’ research in a largely unstudied area comprising the Kimberley in WA, the Top End and northern deserts in NT and the western Gulf Country in NW Qld.

Lead researcher, Associate Professor Michael Braby from the ANU Research School of Biology said 35 per cent of the butterfly-moth fauna in the study area is endemic to the region and not found anywhere else in the world.

“This is one of the most poorly-known regions of Australia and in our work to establish some baseline information about the invertebrates here we identified 132 species of butterfly and 31 day-flying moths.

“These particular grasses are green in the wet season, but then completely dry out during the dry season, so it’s quite a bizarre thing for butterflies to be feeding on, and yet we found not one, but two species have adapted to this unique, harsh environment.

“This is a really unusual association that doesn’t occur anywhere else in the world, so that was a pretty amazing discovery”.

He said another intriguing discovery was with the Mangrove Jezebel (Delias aestiva), a species of the genus Delias.

“There are more than 250 Delias species all of which feed on the parasitic plant, mistletoes but the Mangrove Jezebel has adapted to feed off poisonous mangroves instead (the “Blind Your Eye” or “Milky Mangrove”).

“There’s no precedent for this, it’s a completely unique association. All the butterflies in this genus, from India and southern China down through SE Asia to Australia feed on Loranthaceae and related plants, but we don’t know of any that feed on mangroves in the Euphorbiaceae, so it’s a very novel adaptation.

“When I was rearing the larvae, I found I could still feed them on mistletoes in captivity so that suggests they haven’t lost the ability to feed on that plant entirely, but that whole biological shift is a really unique thing.”

Most exciting to Assoc. Prof. Braby was finding a breeding colony of a rare species called the Mimetic Whistling Moth (Hecatesia sp.“amata”) which emits a whistling sound by rapidly vibrating its wings. He said the species was only known from a single museum specimen, and hasn’t been seen for more than a century.

“I actually found a whole breeding population of these caterpillars when I was looking for a plant that I knew related species feed on. We now have this wonderful colony. I told the park rangers about it so they can take special care of this important area,” he said.

Dr Braby said the area contains small pockets of monsoon forest, which support a disproportionally high number (50) of butterfly and diurnal moth species. “Thirty-four (21%) of these species don’t breed in other habitats and thus are entirely restricted to monsoon forest.”

The north-western corner of the Top End was identified as having special conservation significance. This area supports a high diversity of species, many of which occur nowhere else.

“We believe this region is a refugium where species ranges have persisted and contracted over long periods of time.”

“It means this area is really special and has a very high biodiversity value and yet we know there are huge threats to this region with proposals to open up the north to development.”