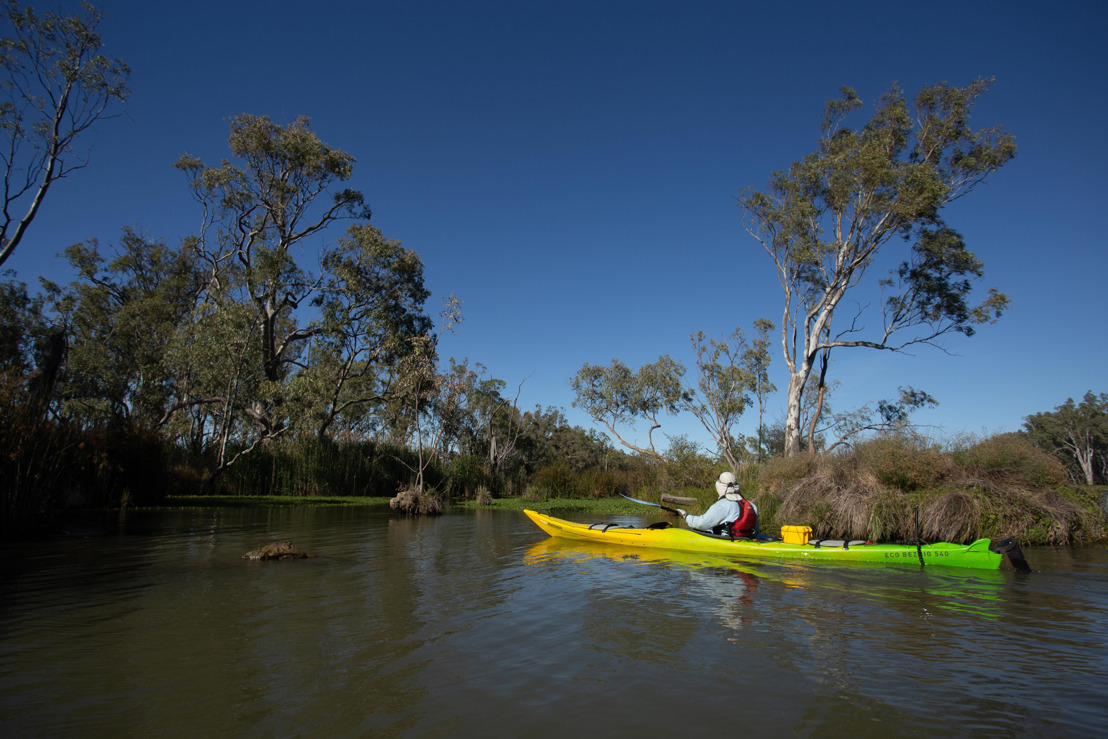 Tuesday, February 11, 2020 — A remarkable new project led by researchers at The Australian National University (ANU) will showcase the beauty of the Murray River, and help re-frame the discussion about the waterway’s health.

Scientists and audio specialists have teamed up to travel the entire length of the river by kayak, starting in Kosciuszko National Park in southeast NSW and ending in South Australia. They are capturing the river’s sights and sounds as well as turning important data about the river into audio.

Honours student Xavier Anderson is one of those taking part in the expedition – now entering its final stages.

"It is rare to see a river all the way from source to sea. We've been through so many landscapes and have seen how the river connects to them all," Mr Anderson said.

“What’s made it even more remarkable is the extreme conditions we’ve faced this summer as we’ve made our way down the river.

"We've been through dust storms, scorching temperatures, hiked through knee-deep snow, paddled in smoke and have battled against strong winds approaching the South Australian border."

Researcher Meredith Hope says they hope to “give the Murray a voice”.

“The Murray-Darling system is the life-blood for millions of Australians,” she said.

“It provides water to drink, grow food, provide transport and of course supports thousands of species in diverse eco-systems.

“But the health of the Murray River remains under pressure despite efforts to improve it.

“So to address this, our research team have been recording the river as they travel from source to sea over two-and-half months. And the sounds and sights we have captured are a powerful expression of the river’s health.

“It's crucial that we communicate the huge importance of this system, celebrate its majestic wonder and continue efforts to preserve it.”

The researchers will also create a soundscape of the river by translating publicly available data for sites right down the Murray – like flow rate, water temperature, salinity and depth - into sound for the first time.

They will also combine this “aural fingerprint” with the sounds and sights collected on the 2,500-kilometre kayaking expedition.

The intention is this will eventually form part of an interactive museum exhibition.

“This travelling exhibit will bring the river to the public,” Ms Hope said.

“We really want to showcase the river’s central role in regional Australia, and help people all over Australia connect with this extraordinary waterway.”

“There is a risk that the Australian public may not support further investment in river health due to a lack of trust in government process and frustration at the cost involved,” she said.

“‘Out of the box’ communication solutions are needed to cut through this negative political space.”

The Helping the River Sing project is a collaboration between the ANU Fenner School of Environment Society and the ANU School of Music.

The group started their journey by hiking to the Murray’s source in Kosciuszko National Park and then pack-rafting down the river on the snow-melt.

They’ll finish at the Murray Mouth in South Australia on Sunday 16 February.