Research from The Australian National University (ANU) has found chimpanzees and orangutans in captivity can improve their quality of life through the use of digital touch-screen technology and interactive games.

They got that concept, it was great to see both the animal and the visitors connecting in a special way.

The preliminary research by Biological Anthropology PhD Candidate Nicky Kim-McCormack, was done at Seoul Zoo in South Korea and also tracked the attitudes of visitors who watched and interacted with the animals using the digital programs.

Ms Kim-McCormack said the intelligence of chimpanzees and orangutans mean they can often get bored in a captive environment.

"This kind of enrichment program can give them a higher quality of life," she said. "It allows them to be challenged in a new ways."

The research involved the apes being given a free choice from a range of different digital activities including some where they interacted with zoo visitors, such as a drawing program where pictures drawn by visitors would show up on the chimp's screen, and vice versa.

"The amazing thing we saw was that the chimps and orangutans realised that they were interacting with the visitors through the program," Ms Kim-McCormack said.

"They got that concept, it was great to see both the animal and the visitors connecting in a special way."

There were also benefits to the visitors, with surveys showing 85 per cent of people who took part indicating a positive change in attitude towards the species and conservation efforts to help them.

Ms Kim-McCormack said her research supported previous studies which suggested the benefits to the animals, but zoos and sanctuaries remained reluctant introduce the activities.

"Some may be concerned that it's not natural, but this may be a human bias that all animals should reflect their wild counterparts," she said.

"We are trying to get results that show it does benefit the animals and it's something that zoos and sanctuaries should consider," she said.

She is currently running a crowdfunding campaign in order to expand her research to other zoos and sanctuaries. You can contribute here. 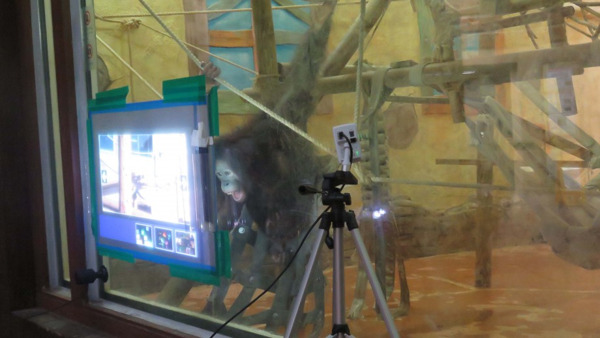