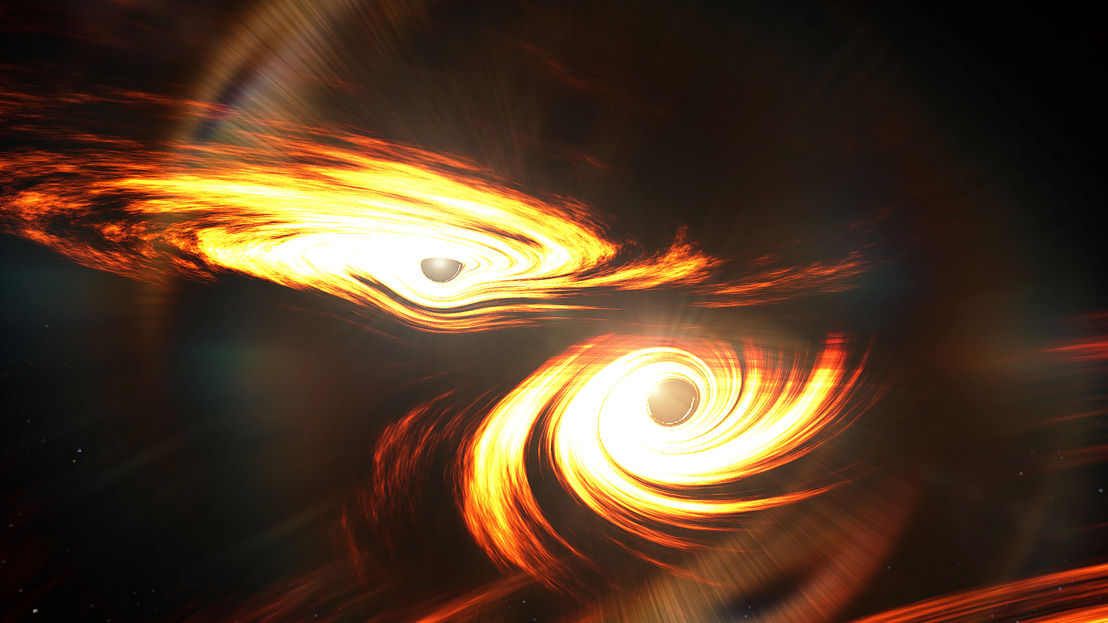 Wednesday, September 2, 2020 — The most massive black hole collision ever detected has been directly observed by the LIGO and VIRGO Scientific Collaboration, which includes scientists from The Australian National University (ANU).

The short gravitational wave signal, GW190521, captured by the LIGO and Virgo gravitational wave observatories in the United States and Europe on 21 May last year, came from two highly spinning, mammoth black holes weighing in at a massive 85 times and 66 times the mass of the Sun, respectively.

But that is not the only reason this system is very special. The larger of the two black holes is considered `impossible’. Astronomers predict that stars between 65 – 130 times the mass of the Sun undergo a process called pair instability, resulting in the star being blown apart, leaving nothing behind.

With a mass of 85 solar masses, the larger black hole falls squarely in that forbidden range, referred to as the upper black hole mass gap, and should be `impossible’. So if it wasn’t created by the collapse of a star, how did it form?

“We think of black holes as the vacuum cleaners of the Universe. They suck in everything in their paths, including gas clouds and stars,” said Professor Susan Scott from the ANU Research School of Physics, a co-author on the publication.

“They also suck in other black holes and it is possible to produce bigger and bigger black holes by the ongoing collisions of earlier generations of black holes. The heavier `impossible’ black hole in our detected collision may have been produced in this way.”

The two black holes merged when the Universe was only about seven billion years old, which is roughly half its present age. They formed an even larger black hole weighing a whopping 142 times the mass of the Sun, by far the largest black hole ever observed through gravitational wave observations.

“The `impossible’ black hole formed by the collision lies in the black hole desert between 100 and 1,000 times the mass of the Sun,” Professor Scott, who is also the Chief Investigator with the ARC Centre of Excellence for Gravitational Wave Discovery (OzGrav), said.

“We are very excited to have achieved the first direct observation of an IMBH in this mass range. We also saw how it formed, confirming that IMBHs can be produced through the merger of two smaller black holes.”

Another recent study suggests scientists using Caltech's Zwicky Transient Facility may have spotted a light flare from the collision. This is surprising, as black holes and their mergers are normally dark to telescopes. One theory is the system may have been orbiting a supermassive black hole. The newly formed black hole may’ve received a kick from the collision, shooting off in a new direction and surging through the disk of gas surrounding the supermassive black hole, causing it to light up. While it is unlikely that the GW190521 detection originated from the same event as the flare, researchers say the possibility that it might have been is intriguing.

“There are a number of different environments in which this system of two black holes could have formed, and the disk of gas surrounding a supermassive black hole is certainly one of them,” OzGrav postdoctoral researcher, Dr Vaishali Adya from ANU, said.

“But it is also possible that this system consisted of two primordial black holes that formed in the early Universe.

“Every observation we make of two black holes colliding gives us new and surprising information about the lives of black holes throughout the Universe. We are beginning to populate the black hole mass gaps previously thought to exist, with `impossible’ black holes that have been revealed through our detections.”

LIGO is funded by the NSF and operated by Caltech and MIT, which conceived of LIGO and lead the project. Financial support for the Advanced LIGO project was led by the NSF with Germany (Max Planck Society), the U.K. (Science and Technology Facilities Council) and Australia (Australian Research Council-OzGrav) making significant commitments and contributions to the project. Approximately 1,300 scientists from around the world participate in the effort through the LIGO Scientific Collaboration, which includes the GEO Collaboration. A list of additional partners is available at https://my.ligo.org/census.php.

The Virgo Collaboration is currently composed of approximately 520 members from 99 institutes in 11 different countries including Belgium, France, Germany, Hungary, Italy, the Netherlands, Poland, and Spain. The European Gravitational Observatory (EGO) hosts the Virgo detector near Pisa in Italy, and is funded by Centre National de la Recherche Scientifique (CNRS) in France, the Istituto Nazionale di Fisica Nucleare (INFN) in Italy, and Nikhef in the Netherlands. A list of the Virgo Collaboration groups can be found at http://public.virgo-gw.eu/the-virgo-collaboration/. More information is available on the Virgo website at http://www.virgo-gw.eu.

The Kamioka Gravitational Wave Detector (KAGRA), formerly the Large Scale Cryogenic Gravitational Wave Telescope (LCGT), is a project of the gravitational wave studies group at the Institute for Cosmic Ray Research (ICRR) of the University of Tokyo. It will be the world's first gravitational wave observatory in Asia, built underground, and whose detector uses cryogenic mirrors. The design calls for an operational sensitivity equal to, or greater, than LIGO. The project is led by Nobelist Takaaki Kajita who had a major role in getting the project funded and constructed.