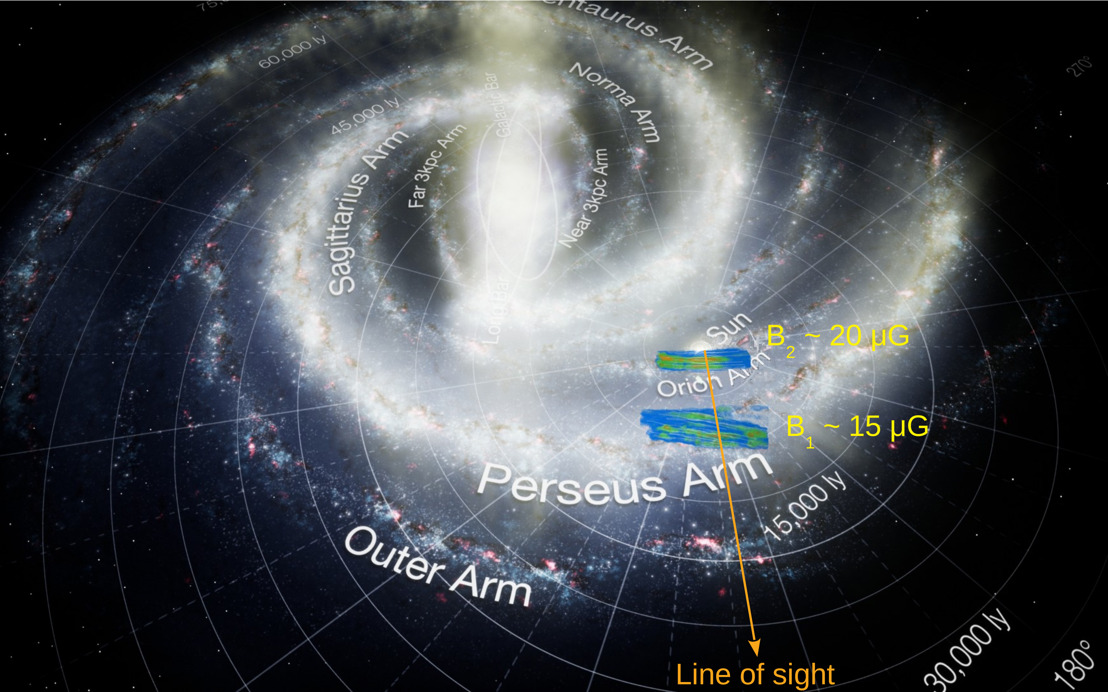 Friday, March 15, 2019 — A new study led by The Australian National University (ANU) has created a 3D map of the magnetic field in a small wedge of the Milky Way galaxy, paving the way for future discoveries that will improve our understanding of the origin and evolution of the Universe.

Lead researcher Dr Aris Tritsis from the ANU Research School of Astronomy and Astrophysics (RSAA) said this was the first study to tomographically measure the strength of our galaxy’s magnetic field.

“Our work paves the way for future discoveries regarding the evolution of the Milky Way, the formation of stars and planets and the early stages of our Universe,” said Dr Tritsis, who collaborated with RSAA colleague Associate Professor Federrath and Associate Professor Vasiliki Pavlidou from the University of Crete.

The galaxy’s magnetic field and cosmic dust act like a veil that obscures the radiation from the early stages of our Universe – known as cosmic microwave background – and have prevented scientists from testing cosmological models for the Universe’s evolution.

“We now have the means to map the strength of the magnetic field for all regions of our galaxy, enabling us to better understand the Universe’s evolution,” Dr Tritsis said.

“The present work is proof that such an ambitious study is feasible. Our next step is to create the first full 3D map of the galaxy’s magnetic field and study all other astrophysical processes that depend on it.”

Associate Professor Federrath said the team found that the galaxy’s strength was much higher than previously thought.

“Most models that predict the strength of our galaxy’s magnetic field for every location and distance from the Sun are based on observations that cannot probe the magnetic field in three dimensions,” he said.

Associate Professor Pavlidou said the study was an important step in understanding how ultra-high-energy cosmic rays travel through our galaxy.

Cosmic rays are very energetic particles, some with energies much higher than what human-made accelerators can reach.

“By understanding the structure and strength of the magnetic field we can boost our chances of finding the locations of the sources of these extremely energetic particles and we can probe new physics at extreme energies,” she said.

Caption: 3D view of the two clouds in which we mapped the magnetic field and their location in the Milky Way galaxy. The orange arrow shows the sight line where the two clouds are observed. Credit: Aris Tritsis and colleagues, Space Nebula Plugin for Unreal Engine 4, Fabian Fuchs & Linus Fuchs. For comparison, the 15 μG (micro Gauss) typically measured in the interstellar medium is 10 million times smaller than the strength of a fridge magnet. Despite its small value, and because it spans tens or hundreds of light years it is extremely important for all the processes mentioned in the press release.