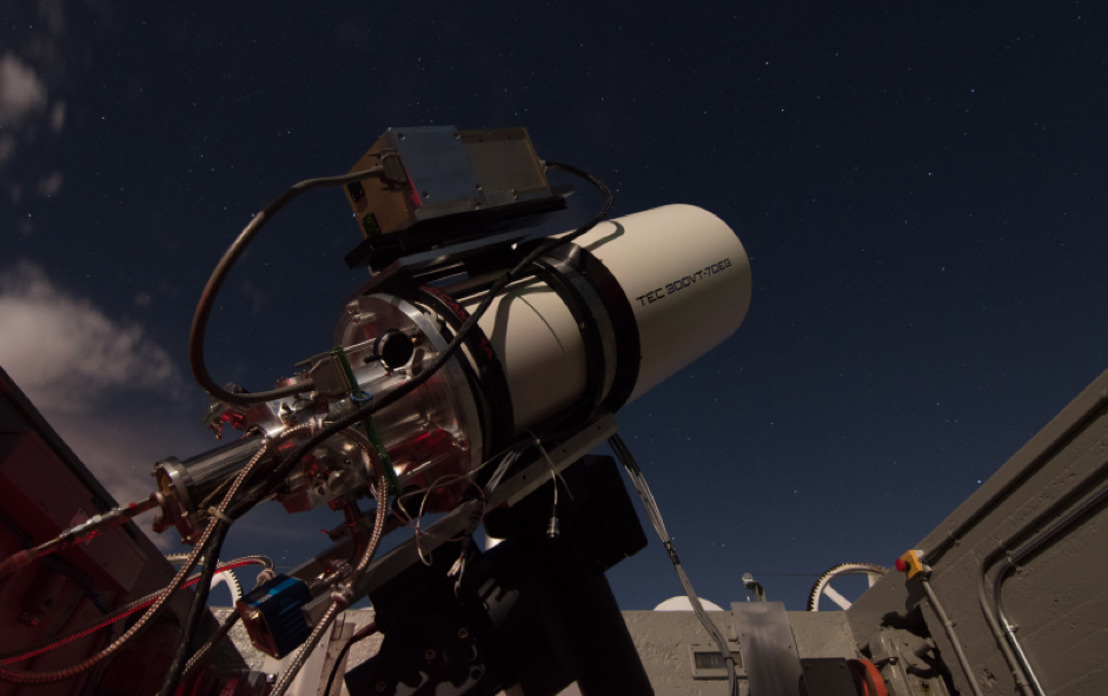 Tuesday, October 16, 2018 — A new infrared telescope designed and built by astronomers at The Australian National University (ANU) and the California Institute of Technology (Caltech) in the US will be the first of its kind to monitor the entire northern sky in search of new cosmic events.

The agile robotic telescope, called Gattini-IR, will scan the northern sky once every night, from the Palomar Observatory in southern California, allowing astronomers to observe and study fast-changing transient and variable events with unprecedented speed and accuracy.

Co-lead researcher Professor Anna Moore, Director of the Advanced Instrumentation and Technology Center (AITC) at the ANU Research School of Astronomy and Astrophysics, said such a survey had never been done before in the infrared and would help find many hidden treasures in the Universe.

“By creating a real-time mosaic of the northern sky every night, we’ll pick up lots of fascinating objects and dramatic events, such as the final throes of dying stars obscured by dust, and detection of some of the oldest stars in our galaxy,” Professor Moore said.

“Until now these phenomena have been effectively invisible to researchers, because they could not be seen through optical telescopes.”

“In addition to letting us see through clouds of dust, infrared light can tell us a lot about the formation of heavy elements – such as gold and platinum – in neutron star mergers like the one ANU researchers and others were fortunate to observe last year,” Professor Moore said.

In August last year, scientists observed the first confirmed merger of two neutron stars, dubbed GW170817. While GW170817 lit up at all wavelengths, it was the long-lived infrared radiation that provided the first evidence that heavy elements are created in such mergers.

“We now know that collisions of neutron stars will shine brightest in infrared, and Palomar Gattini-IR is the demonstrator instrument for this method of detection,” Professor Moore said.

“Palomar Gattini-IR is a precursor to more ambitious projects that will allow the research team to find out exactly which heavy elements are made in mergers between neutron stars and how much of these elements, and will help us answer other big questions about the universe,” Assistant Professor Kasliwal said.

ANU PhD scholar Jamie Soon, who is part of the research team, said DREAMS would help to find the oldest stars in the Milky Way galaxy.

“The data from DREAMS could be used to help improve scientific understanding of how our galaxy formed,” Mr Soon said.

Palomar Gattini-IR is funded by ANU, the US Mt Cuba Foundation, RCSA Scialog award and the United States-Israel Binational Science Foundation grant. In addition, Caltech has awarded funds to the research leaders. The Palomar Gattini-IR/DREAMS team includes Dr Tony Travouillon from ANU and Professor Michael Ashley at the University of New South Wales.