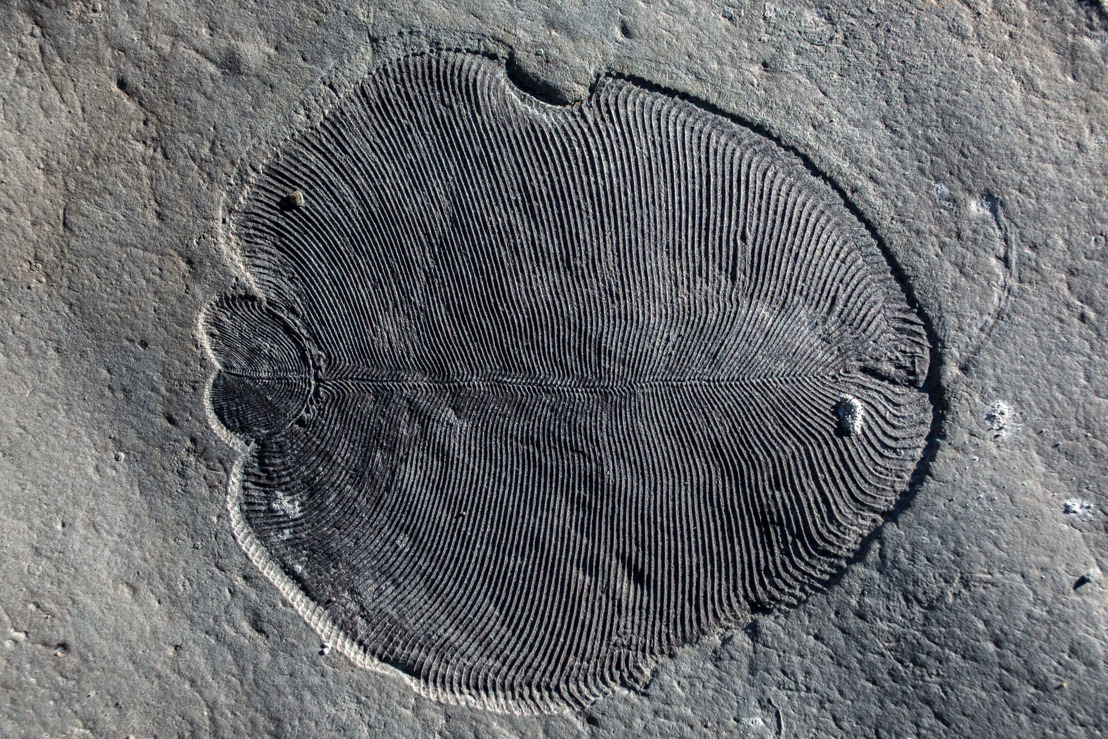 Friday, September 21, 2018 — Scientists from The Australian National University (ANU) and overseas have discovered molecules of fat in an ancient fossil to reveal the earliest confirmed animal in the geological record that lived on Earth 558 million years ago.

The strange creature called Dickinsonia, which grew up to 1.4 metres in length and was oval shaped with rib-like segments running along its body, was part of the Ediacaran Biota that lived on Earth 20 million years prior to the ‘Cambrian explosion’ of modern animal life.

ANU PhD scholar Ilya Bobrovskiy discovered a Dickinsonia fossil so well preserved in a remote area near the White Sea in the northwest of Russia that the tissue still contained molecules of cholesterol, a type of fat that is the hallmark of animal life.

Lead senior researcher Associate Professor Jochen Brocks said the ‘Cambrian explosion’ was when complex animals and other macroscopic organisms – such as molluscs, worms, arthropods and sponges – began to dominate the fossil record.

“Scientists have been fighting for more than 75 years over what Dickinsonia and other bizarre fossils of the Edicaran Biota were: giant single-celled amoeba, lichen, failed experiments of evolution or the earliest animals on Earth. The fossil fat now confirms Dickinsonia as the oldest known animal fossil, solving a decades-old mystery that has been the Holy Grail of palaeontology.”

Mr Bobrovskiy said the team developed a new approach to study Dickinsonia fossils, which hold the key between the old world dominated by bacteria and the world of large animals that emerged 540 million years ago during the ‘Cambrian explosion’.

“The problem that we had to overcome was finding Dickinsonia fossils that retained some organic matter,” said Mr Bobrovskiy from the ANU Research School of Earth Sciences.

“Most rocks containing these fossils such as those from the Ediacara Hills in Australia have endured a lot of heat, a lot of pressure, and then they were weathered after that – these are the rocks that palaeontologists studied for many decades, which explained why they were stuck on the question of Dickinsonia’s true identity.”

Palaeontologists normally study the structure of fossils, but Mr Bobrovskiy extracted and analysed molecules from inside the Dickinsonia fossil found in ancient rocks in Russia to make the breakthrough discovery.

“I took a helicopter to reach this very remote part of the world – home to bears and mosquitoes – where I could find Dickinsonia fossils with organic matter still intact,” Mr Bobrovskiy said.

“These fossils were located in the middle of cliffs of the White Sea that are 60 to 100 metres high. I had to hang over the edge of a cliff on ropes and dig out huge blocks of sandstone, throw them down, wash the sandstone and repeat this process until I found the fossils I was after.”

Associate Professor Brocks said being able to study molecules from these ancient organisms was a gamechanger.

“When Ilya showed me the results, I just couldn’t believe it,” he said.

“But I also immediately saw the significance.”

ANU led the research in collaboration with scientists from the Russian Academy of Science and the Max Planck Institute for Biogeochemistry and the University of Bremen in Germany.

The research is published in Science.

Reporters wishing to link to this paper's abstract on sciencemag.org can use the following URL: http://science.sciencemag.org/cgi/doi/10.1126/science.aat7228

High-resolution images: https://cloudstor.aarnet.edu.au/plus/s/9tYtGxZvw7ENOs5
* Descriptions for each image are available in the file information. Please credit ANU.

For media assistance, contact the ANU media hotline on +612 6125 7979 or email the ANU Media Team at [email protected]