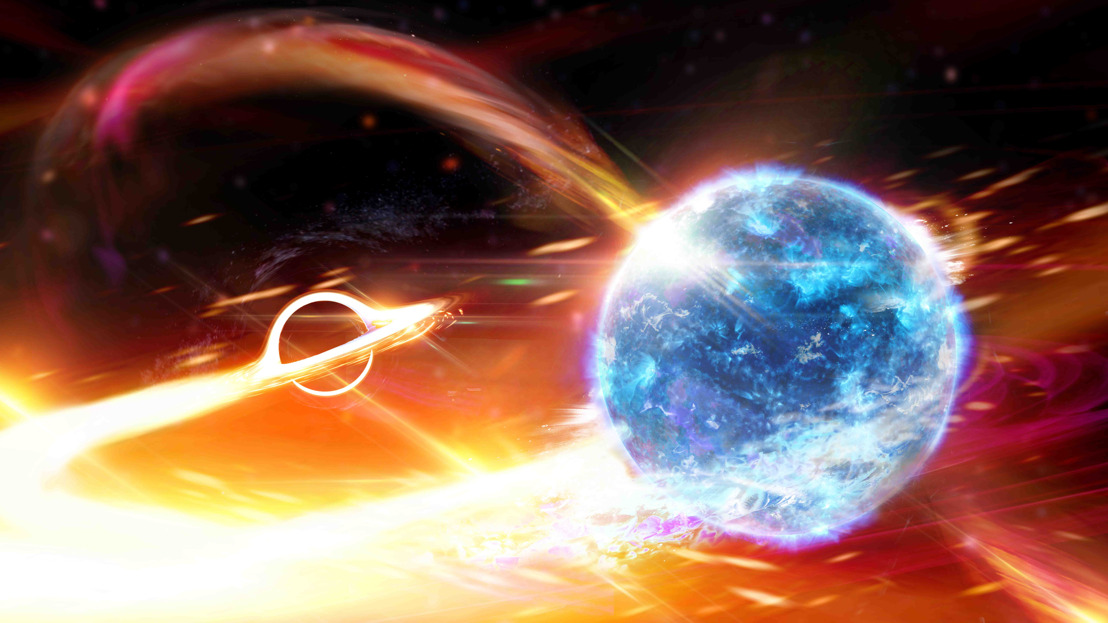 Monday, August 19, 2019 — Scientists, including from The Australian National University (ANU), say they have detected a black hole swallowing a neutron star for the first time.

Neutron stars and black holes are the super-dense remains of dead stars.

On Wednesday 14 August 2019, gravitational-wave discovery machines in the United States and Italy detected ripples in space and time from the cataclysmic event that happened about 8,550 million trillion kilometres away from Earth.

Professor Susan Scott, from the ANU Research School of Physics, said the achievement completed the team’s trifecta of observations on their original wish list, which included the merger of two black holes and the collision of two neutron stars.

“About 900 million years ago, this black hole ate a very dense star, known as a neutron star, like Pac-man – possibly snuffing out the star instantly,” said Professor Scott, Leader of the General Relativity Theory and Data Analysis Group at ANU and a Chief Investigator with the ARC Centre of Excellence for Gravitational Wave Discovery (OzGrav).

“The ANU SkyMapper Telescope responded to the detection alert and scanned the entire likely region of space where the event occurred, but we’ve not found any visual confirmation.”

Scientists are still analysing the data to confirm the exact size of the two objects, but initial findings indicate the very strong likelihood of a black hole enveloping a neutron star. The final results are expected to be published in scientific journals.

“Scientists have never detected a black hole smaller than five solar masses or a neutron star larger than about 2.5 times the mass of our Sun,” Professor Scott said.

“Based on this experience, we’re very confident that we’ve just detected a black hole gobbling up a neutron star.

“However, there is the slight but intriguing possibility that the swallowed object was a very light black hole – much lighter than any other black hole we know about in the Universe. That would be a truly awesome consolation prize.”

ANU plays a lead role in Australia's partnership with the Advanced Laser Interferometer Gravitational-wave Observatory (LIGO), which is the most sensitive scientific instrument ever built and comprises twin detectors in the US.

The European Gravitational Observatory has a gravitational-wave detector in Italy called Virgo.

IMAGES & OTHER VISUALS FOR MEDIA USE:

Contact Will Wright on william.wright@anu.edu.au to request a high-resolution artist's depiction of a black hole about to swallow a neutron star (as seen above) and to discuss other options for visuals to go with this story.

LIGO is funded by the NSF, and operated by Caltech and MIT, which conceived of LIGO and led the Initial and Advanced LIGO projects. Financial support for the Advanced LIGO project was led by the NSF with Germany (Max Planck Society), the UK (Science and Technology Facilities Council) and Australia (Australian Research Council) making significant commitments and contributions to the project. More than 1,200 scientists and some 100 institutions from around the world participate in the effort through the LIGO Scientific Collaboration, which includes the GEO Collaboration and the Australian collaboration OzGrav. Additional partners are listed at http://ligo.org/partners.php

The Virgo collaboration consists of more than 280 physicists and engineers belonging to 20 different European research groups: six from Centre National de la Recherche Scientifique (CNRS) in France; eight from the Istituto Nazionale di Fisica Nucleare (INFN) in Italy; two in the Netherlands with Nikhef; the MTA Wigner RCP in Hungary; the POLGRAW group in Poland; Spain with the University of Valencia; and the European Gravitational Observatory, EGO, the laboratory hosting the Virgo detector near Pisa in Italy, funded by CNRS, INFN, and Nikhef.