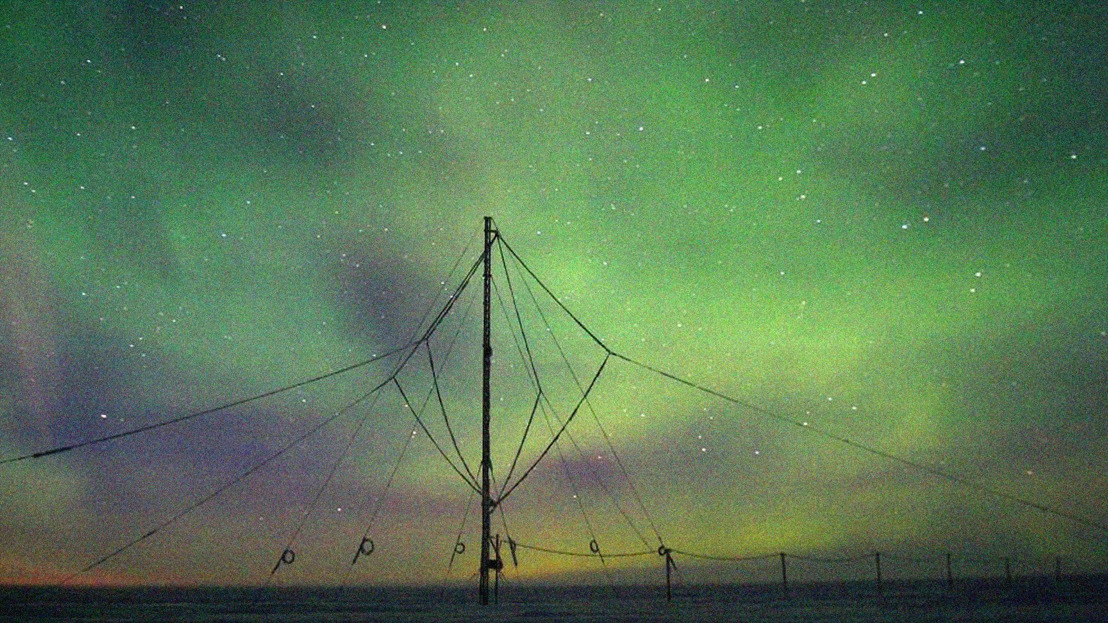 Wednesday, May 6, 2020 — The eerie and usually unheard sounds of space captured in the deep cold of Antarctica could be the next hot hit, thanks to a new research, musical and artistic collaboration.

The unique project takes recordings of Earth’s natural radio sounds, normally not audible to the human ear, and stunning imagery captured at the Halley Research Station to create a 90-minute soundtrack set to piano. The resulting album, Aurora Musicalis, is released today.

The trio behind the space soundtrack are musician and composer Associate Professor Kim Cunio from The Australian National University’s School of Music, Dr Nigel Meredith a space weather researcher based at the British Antarctic Survey, and Cambridge-based, artist-engineer, Diana Scarborough.

For the soundtrack Dr Meredith worked with four years of data from the Halley Very Low Frequency (VLF) receiver and carefully selected a day featuring a rich variety of radio emissions made by the planet, including spherics, whistlers and chorus.

This data is normally used to investigate space weather storms, the impact of space weather on our climate and to detect lighting, but conversion to sound reveals a series of weird and wonderful noises, known as the ‘sounds of space’.

“But we can take these electromagnetic waves and turn them into audible sounds. The result is these eerie noises that make you feel you are on the set of a classic science fiction film, but which at the same time are strangely familiar.

“Take ‘spherics’ for example. They are the radio pulses caused by lightning flashes, sometimes up to 10,000 kilometres away. When converted into audio files, they sound like the gentle crackling of a fire or the pop of a distant transmission from outer space.

“Then there’s the ‘chorus’, which are emissions from deep within the magnetosphere, the magnetic bubble surrounding the Earth. When you convert these into audio, they sound like a host of bird whistles in a forest.”

“Aurora Musicalis is a statement that science and art can work together,” he said.

“Not solely to entertain as such collaborations were imagined generations ago, but to unite us in telling the story of our planet as it struggles under multiple stresses, each of which could change our civilisation within a generation.

“We must trust our scientists, who by nature are not activists, but truth tellers who usually shy away from political or social conflict over the results of their findings. Music and the arts have a role to play in galvanising us into facilitating the urgent and immediate care that our planet needs.”

“The Halley Research Station is located in the remote Brunt Ice Shelf. It’s not only ideal for capturing these incredible sounds, but also stunning visuals, including spectacular auroras that light the horizons with bright and captivating colour,” Ms Scarborough said.

“These images provide an enthralling video for the soundtrack. They are also the perfect way for the human eye to soak in what the ear hears on this album.

“I was really inspired by the rich archive of images collected at Halley and knew they would be the perfect way of helping people ‘see’ the amazing sounds selected by Nigel and the beautiful, mesmerising music composed by Kim.”

Aurora Musicalis forms part of the ‘Sounds of Space’ project and is available on BandCamp.

Recordings of the 'sounds of space', a sample of the Aurora Musicalis soundtrack and photos from the Halley Research Station are available here. (Credit space sounds and photos to British Antarctic Survey).