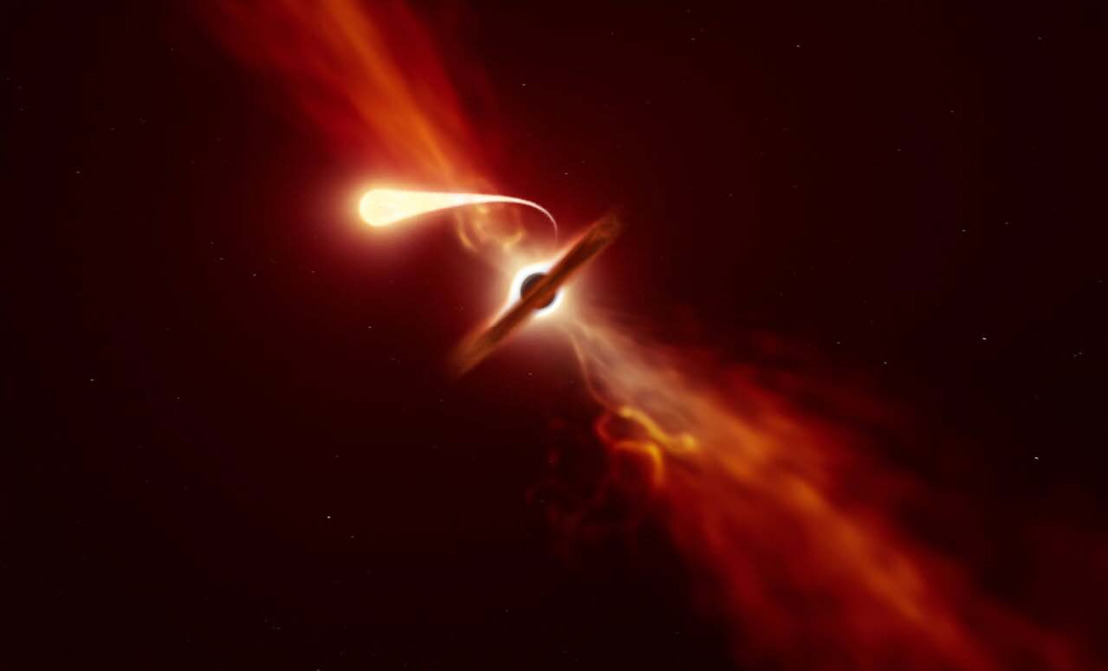 Monday, October 12, 2020 — Astronomers have spotted a rare phenomenon – a star being ripped apart by a supermassive black hole in a process called “spaghettification”.

The event, known as a “tidal disruption”, was detected using telescopes from the European Southern Observatory (ESO), and is the closest flare of its kind ever recorded, at just over 215 million light years from Earth.

According to Dr Brad Tucker from The Australian National University (ANU), who was part of the research team, black holes are famous for “ripping things apart” by spaghettification.

This happens when the extreme gravitational pull of the black hole shreds the star into thin streams of material. As some of this material falls into the black hole, a bright flare of energy is released.

“These events are rare, and hard to spot. The burst of light can also be easily blocked by dust,” Dr Tucker said.

“So being able to actually see this process, and some of the energy released from it is super cool.”

The researchers found that when a black hole devours a star, it can launch a powerful blast of material outwards, obstructing our view.

This is due to the energy released as the black hole eats up stellar material, which propels debris from the star outwards.

On this occasion the tidal disruption event – named AT2019qiz – was found a short time after the star was ripped apart, making it easier to detect.

The team say AT2019qiz could potentially act as a ‘Rosetta stone’ for interpreting future observations of similar events.

“We are learning more and more about the activity and nature of black holes,” Dr Tucker said.

“This year’s Nobel Prize in Physics was partially for supermassive black holes in our galaxy.

"With facilities like those at ESO, and the ANU Siding Spring Observatory, we can continue to shed light on these awesome cosmic objects!"

The team - led by Dr Matt Nicholl from the University of Birmingham in the UK - carried out observations of AT2019qiz over a six-month period as the flare grew brighter, then faded away.

The research has been published in Monthly Notices of the Royal Astronomical Society.

The illustration depicts a star (in the foreground) experiencing spaghettification as it’s sucked in by a supermassive black hole (in the background) during a ‘tidal disruption event’. In a new study, done with the help of ESO’s Very Large Telescope and ESO’s New Technology Telescope, a team of astronomers found that when a black hole devours a star, it can launch a powerful blast of material outwards.
Credit: ESO/M. Kornmesser