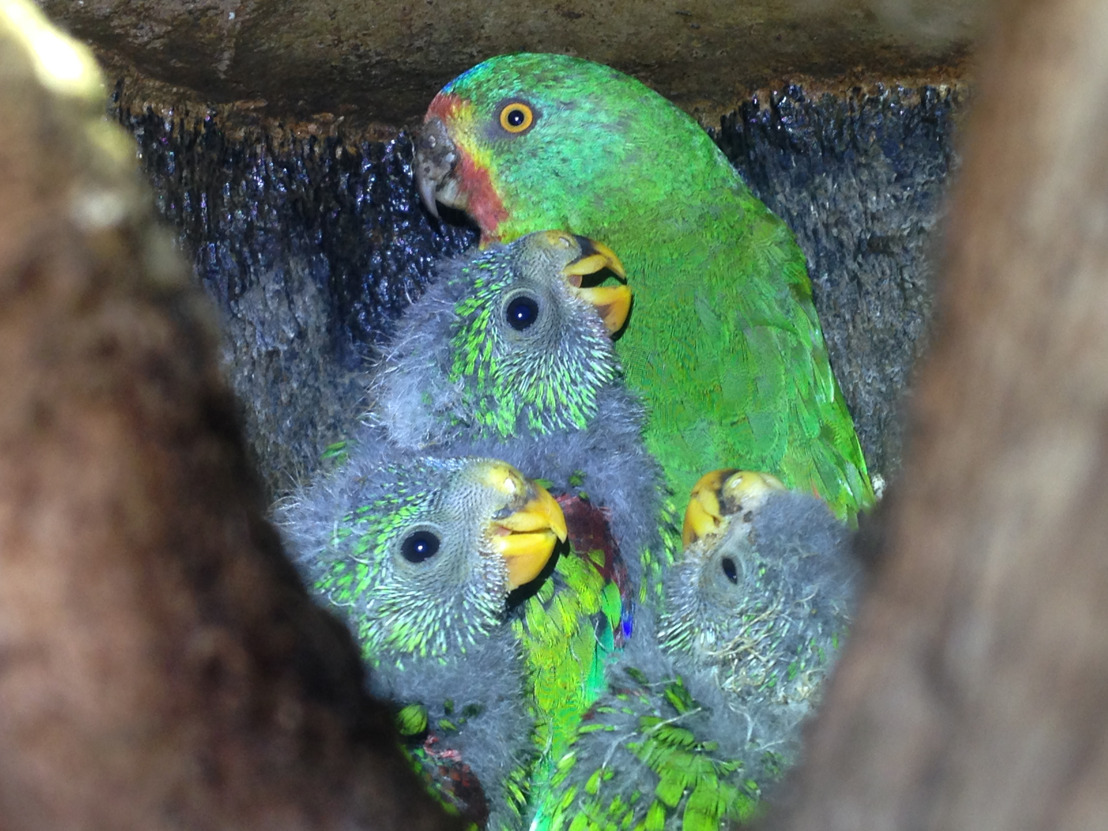 Wednesday, December 5, 2018 — Scientists at The Australian National University (ANU) have found a chronic shortage of females in a critically endangered parrot species has led to love triangles, sneaky sex on the side, increased fighting between males and fewer babies.

The ratio of males to females among swift parrots was once roughly equal but it has increased over time to almost three to one, since the introduction of a tiny predator to Tasmania in the 1800s – the sugar glider.

Sugar gliders can access nest hollows and kill female swift parrots while they incubate their eggs. More than half of the females die each year at their breeding grounds in Tasmania.

Lead researcher Professor Rob Heinsohn said the research team studied the swift parrot mating system using molecular techniques and found more than half of the nests had babies with more than one father.

“This is remarkable for parrots because most species are monogamous,” said Professor Heinsohn from the ANU Fenner School of Environment and Society.

The study, which is published in the Journal of Animal Ecology, found mate sharing was not beneficial for anyone in the ménage à trois.

The researchers used population modelling to isolate the impact of lower reproduction due to mating in trios.

“Although most population decline was directly attributable to sugar gliders killing nesting females, the impact of conflict and lower success from shared mating reduced the population by a further five per cent,” Professor Heinsohn said.

“We were aware of many nests where an extra male would hang around and harass the female, but were absolutely flabbergasted to find that the females were engaging in sneaky sex with them.

“We think the females are having sex with the other males for a range of reasons, but probably the main one is just to get them off their backs.”

“The obvious costs to females are being harassed by too many males, while males are forced to fight for females to mate,” he said.

“The overall population takes a hit, as a consequence, because they are having fewer babies.”

Professor Heinsohn said the study was important because it teases apart how individuals in populations may be affected differently by introduced predators.

“Especially how the loss of so many females can change the balance of the sexes, as well as the whole mating and social system,” he said.

Professor Heinsohn said swift parrots were not the only species where the fabric of society was threatened by too few females.

“It’s happening in other birds, reptiles, and even humans in some parts of the world,” he said.

Co-author Dr Dejan Stojanovic said now that the impact of sugar gliders was well understood, the ANU team had embarked on a major program to find innovative ways of limiting their impact on swift parrots.

Dr Stojanovic discovered the deadly impact of sugar gliders on swift parrots in 2014.

“Our methods for helping swift parrots include improving the habitat on small islands off Tasmania where sugar gliders do not occur, and devising clever predator-proof nest boxes for the birds to use elsewhere”, he said.

* Images available to be downloaded by clicking on the image icons below. Image credit: Dejan Stojanovic, ANU