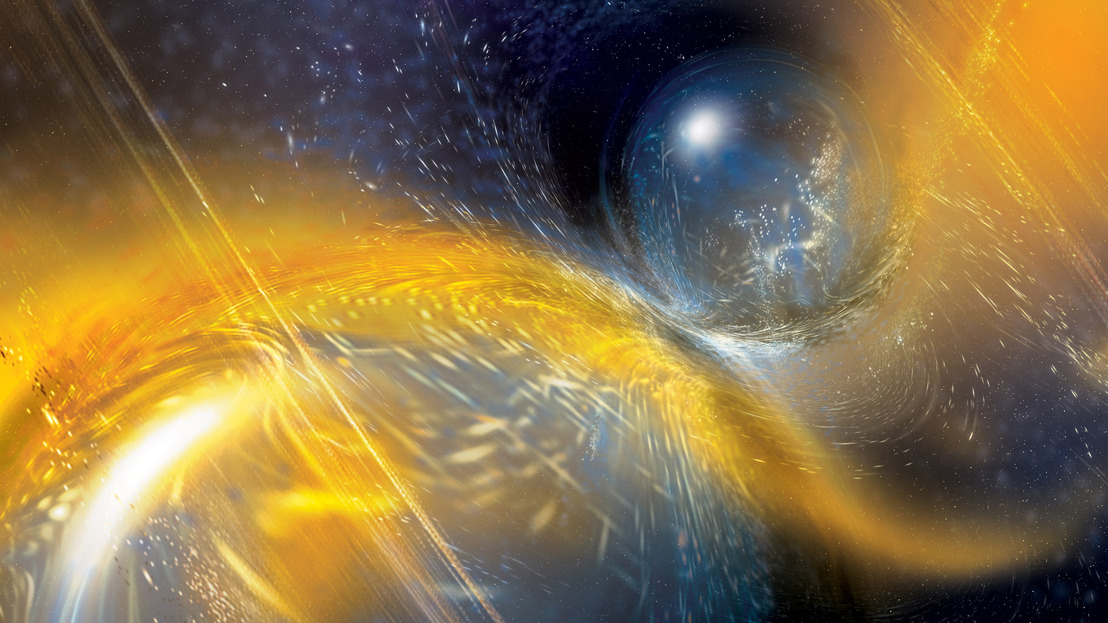 Tuesday, January 7, 2020 — The detection of two neutron stars colliding in space about five billion trillion kilometres away has left an international team of scientists scratching their heads.

ANU Professor Susan Scott, who is part of the team that studied the cataclysmic event, said these neutron stars – the super-dense remains of dead stars – had been orbiting each other in a binary system prior to the big crash about 520 million years ago.

“We were very surprised by the total mass of this ancient neutron star binary system, which is about 3.4 times the mass of our Sun, as it far exceeds the mass of known neutron star binaries in our own galaxy,” said Professor Scott, Leader of the General Relativity Theory and Data Analysis Group at the ANU Research School of Physics and a Chief Investigator with the ARC Centre of Excellence for Gravitational Wave Discovery (OzGrav).

“This leads to the intriguing possibilities that the old binary system we’ve discovered formed diﬀerently to those observed in the Milky Way and that neutron star binaries this massive may not be detectable by current telescope surveys.”

The discovery came just weeks after the restarting of the most sensitive scientific instrument ever built – the Advanced Laser Interferometer Gravitational-wave Observatory (LIGO) – which comprises twin detectors in the United States.

On 25 April 2019 (Anzac Day), one of the LIGO machines detected the ripples in space and time from the collision of these two neutron stars. This event, labelled GW190425, is thought to be the second detection of a neutron star collision.

ANU plays a lead role in Australia's partnership with LIGO and contributed to instrument upgrades during the year of downtime prior to the third observing run, which is still ongoing.

The LIGO detectors and the European Gravitational Observatory’s gravitational-wave detector in Italy, Virgo, made the first observation of two neutron stars smashing together on 17 August 2017. Astronomers pinpointed the cataclysmic event and telescopes all over the world observed a fireball shooting from it.

The findings from the second discovery are expected to be published in The Astrophysical Journal Letters at on the morning of Tuesday 7 January 2020 AEDT.

The masses of the two neutron stars in the binary are about two and 1.4 times the mass of the Sun, respectively.

Professor Scott said one of the LIGO detectors was offline briefly at the critical moment for the latest event, which meant achieving a visual confirmation of the collision proved too challenging.

“ANU led efforts to locate the neutron star collision by scanning a massive region of the southern sky for bright light from the explosion with the SkyMapper telescope,” said Professor Scott, who is a co-investigator on the SkyMapper team at ANU.

“The fact that this neutron star collision was about five times more distant than our first one and the sky region was so large, meant that it was like searching for a needle in a haystack.”

Dr Chris Onken, from the ANU Research School of Astronomy and Astrophysics, said no telescope was able to pinpoint the source for this event.

“SkyMapper and other telescopes around the world will play a vital role in detecting similar events in the future,” said Dr Onken, who is the SkyMapper Operations Manager.

MULTIMEDIA AVAILABLE FOR MEDIA USE:

* Image below can be downloaded by clicking on the image icon. Suggested caption: An artist's impression of the two neutron stars colliding. Image credit: National Science Foundation/LIGO/Sonoma State University/A. Simonnet

* Here is a link to photos of two ANU scientists involved: https://cloudstor.aarnet.edu.au/plus/s/4krgDf2lFjBedrW

LIGO is funded by the NSF, and operated by Caltech and MIT, which conceived of LIGO and led the Initial and Advanced LIGO projects. Financial support for the Advanced LIGO project was led by the NSF with Germany (Max Planck Society), the U.K. (Science and Technology Facilities Council) and Australia (Australian Research Council) making significant commitments and contributions to the project. More than 1,200 scientists and some 100 institutions from around the world participate in the effort through the LIGO Scientific Collaboration, which includes the GEO Collaboration and the Australian collaboration OzGrav. Additional partners are listed at http://ligo.org/partners.php

The Virgo collaboration consists of more than 280 physicists and engineers belonging to 20 different European research groups: six from Centre National de la Recherche Scientifique (CNRS) in France; eight from the Istituto Nazionale di Fisica Nucleare (INFN) in Italy; two in the Netherlands with Nikhef; the MTA Wigner RCP in Hungary; the POLGRAW group in Poland; Spain with the University of Valencia; and the European Gravitational Observatory, EGO, the laboratory hosting the Virgo detector near Pisa in Italy, funded by CNRS, INFN, and Nikhef.

SkyMapper is a wide-field optical telescope with a 1.3m-diameter primary mirror, operated by the ANU Research School of Astronomy and Astrophysics and located at Siding Spring Observatory near Coonabarabran, New South Wales, Australia. Additional information is available at: http://skymapper.anu.edu.au