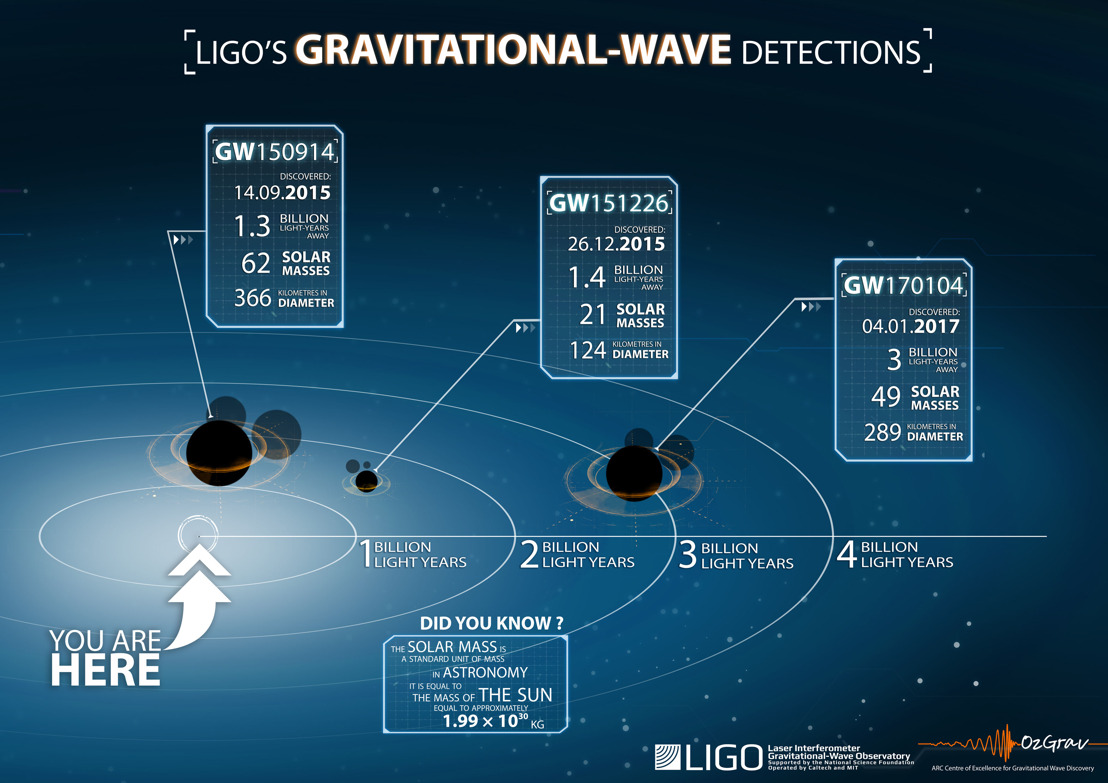 Friday, June 2, 2017 — An international team of researchers has made a third detection of gravitational waves, ripples in space and time, in a discovery that provides new insights into the mysterious nature of black holes and, potentially, dark matter.

On 4 January this year, the team intercepted the minute gravitational waves from a binary black hole system three billion light years away undergoing its final death throes to form a larger black hole about 50 times the mass of the Sun.

The research is published in Physical Review Letters.

The Australian National University (ANU) is one of the leading Australian institutions supporting the Laser Interferometer Gravitational-wave Observatory (LIGO) project.

Professor Susan Scott from the ANU Research School of Physics and Engineering (RSPE) said the discovery provided the first evidence that black holes in binary systems may not be aligned.

“This means that the two black holes could be spinning in opposite directions, which provides a tantalising clue as to how the binary system may have formed,” said Professor Scott, who is also a Chief Investigator of the ARC Centre of Excellence for Gravitational Wave Discovery (OzGrav).

“It’s possible that this is a binary system of black holes formed in the early Universe that contributes significantly to the dark matter in the cosmos.

“This heavy stellar-mass binary black hole system was at a much greater distance than the first two gravitational wave events, at some three billion light years away.

“This discovery highlights the need to continue improving the sensitivity of our detectors to see further and further out into the Universe.”

ANU scientists designed systems to improve the duty cycle of the LIGO detectors so that more time can be spent searching for gravitational waves.

Researchers Dr Bram Slagmolen and Dr Robert Ward from RSPE are working on further improvements to the instruments so the team will be able to detect other types of events such as gravitational waves radiated by neutron stars, which are made when giant stars explode and their cores collapse.

“We hope to detect continuous gravitational waves from neutron stars, which is good motivation to develop advanced technologies including quantum-squeezing optical devices to search for these fainter sources of gravitational waves,” said Dr Ward, who is also a member of OzGrav.

ANU and the University of Melbourne are leading OzGrav’s search for gravitational waves from neutron stars using LIGO data.

LIGO is funded by the National Science Foundation (NSF), and operated by MIT and Caltech, which conceived and built the project. Financial support for the Advanced LIGO project was led by NSF with Germany (Max Planck Society), the U.K. (Science and Technology Facilities Council) and Australia (Australian Research Council) making significant commitments and contributions to the project. More than 1,000 scientists from around the world participate in the effort through the LIGO Scientific Collaboration, which includes the GEO Collaboration. LIGO partners with the Virgo Collaboration, a consortium including 280 additional scientists throughout Europe supported by the Centre National de la Recherche Scientifique (CNRS), the Istituto Nazionale di Fisica Nucleare (INFN), and Nikhef, as well as Virgo’s host institution, the European Gravitational Observatory. Additional partners are listed at: http://ligo.org/partners.php.